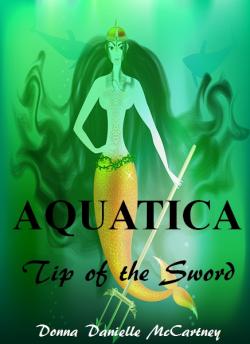 Donna McCartney
Click link to see all books by this author.
Genre: Young Adult. Format: eBook. Views: This Week 368, Total 1810.
For the Seafarer family, the water is where it all began, generations later, when little Kyle is selected to sit at the Circle of Trust in his grandmothers stead, he finds himself entering the dark and dangerous waters of Aquatica. Aquatica sits between the Briny Basin and the Crystal Cliffs in Neptunes realm, where the water runs clean and clear, where Ray Riders soar and wild seahorses roam free.

The untimely death of Kyles beloved grandmother brings about a startling revelation, when he realizes the cryptic stories she shared about Em, a Meridian, and Mye, an Ancient Mariner, were in fact stories about her and Papa and their life before they moved topside.

Kyle receives a mysterious adventure pack for his birthday with a note that reads:

It was your grandmothers last wish to give this adventure pack to you. Inside you will find one set of No Fail Sail Wear, an Electric Eel Belt, Wrist Racers and a Water Compass / Fish Finder. Use them well.
Tune
P.S. Be sure to be at the waters edge the first day of spring.

When the first day of spring arrives, Kyle is at the waters edge in the strange No Fail Sail Wear, electric eel belt and wrist racers. He cant resist the urge to jump in the inviting water where he meets an Irish Sea Sprite named Maeve. His wrist racers activate and he is transported to Aquatica with Maeve. Kyle enters the underwater temple in the midst of the kings Gala and is met by anxious Meridians.

Meanwhile, Kyles well-meaning older brothers, Kevin and Triston, have followed him and are arrested as they attempt to enter Aquatica. They are thrown into a water cell until it is time for the boys return topside.

Kyle is inducted into an elite aqua force known as the Aqua Defenders and sits at the Circle of Trust where his grandmother sat for decades. He meets a myriad of memorable characters and is given his first mission - to investigate the rise of the stinging nettles with fellow Aqua Defender, Feng. Maeve escorts the Seafarer boys back to Red Claw Marina with a piece of advice. As Kyle is the youngest and newest Aqua Defender, his brothers are to help him fulfill his role.

Fellow Aqua Defender Feng breaks ranks and is secretly working with Hades, putting little Kyle in danger on his first mission to investigate the growing stinging nettle population, when he comes under attack from an Ancient Mariner.

The attack brings about more than one revelation as Kyle will soon discover that he has Neptunium blood running through his veins. Everyone suspects that he is related to royalty when in fact that couldnt be ****her from the truth. Kyles Meridian heritage is passed down to him from his grandmother, but his grandfather was actually an enslaved Ancient Mariner that risked his life to help Em escape the Banshees clutches. As a reward for his bravery, Neptune used a single drop of his blood to bring Kyles grandfather back to the land of the living. Little Kyle is secretly a unique blend between everyone fighting in Aquatica, from royalty to slaves. He is the water child destined to save Aquatica from self-destruction.

Delphina, the Oracle, is surprised to find out that the Banshee of the Bay is actually transforming the stinging nettles into deadly men of war, preparing for an epic battle. Frustration mounts as the Banshee proves to be an elusive foe living in a floating fortress known as Noir Castle.

Aqua Defenders Captn Red Aye and Tufuga are dispatched to the Isle of Sculpin where they apprehend a giant sized Man of War and bring the creature back to Aquatica to await its fate in a water cell with other water disturbances. Tufuga gets a taste of the deadly toxin that eats through his anti-jelly sea soap and burns his skin. Unknown to the Defenders is the fact that the creature has been altered and contains a highly potent toxin that will eventually lead to the capture of King Neptune.

The boys find their grandmothers hidden diary and discover a piece of important history regarding the destruction of Atlantis, which all but dissolved the fledgling alliance Neptune had forged with the Land Rovers. Neptunes son was thought to have been killed in the blast. The diary outlines the heavy burden the Seafarers have protecting family secrets that led to the total annihilation of the council of elders known as the Deep Six, one of which was a distant relative of the Seafarers.

After centuries of searching Grammy has uncovered the precise location of Fortune Falls, but dies before making her way to recover the ancient map. Kyle and his brothers venture to Aquatica to discover more about their heritage when war breaks out and they end up behind enemy lines to witness the return of Neptunes evil son, Dagon who hopes to dethrone his father. Battle erupts as the Seafarers try to make it to the safety of Aquatica. Aqua Defenders and Meridians aid in a counter attack, rescuing the Seafarers in the process. When the opaque dome lowers over Aquatica, Aqua Defenders  Feng and Bebe are left on the other side where Feng reveals himself as the traitor within. Bebe narrowly escapes Dagons clutches using the magic her father taught her and clings to the mast of a nearby ship hiding among the sails at the top of its mast. Dagon and Feng believe Bebe to be dead as the two part ways.
Search for the title using