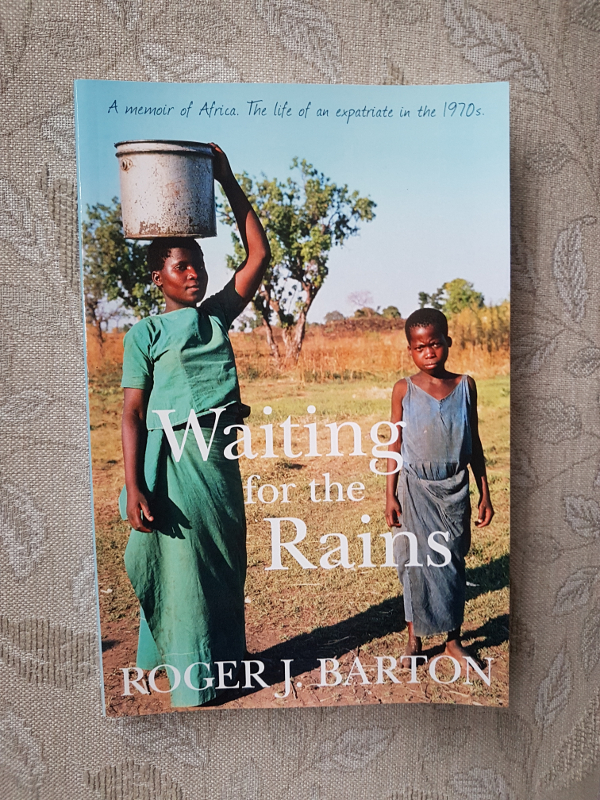 Waiting for the Rains

Published in 2012 by Dovetail Press, Waiting for the Rains  A Memoir of Africa : The Life of an Expatriate in the 1970s is Roger Barton's memoir of his life as an expatriate in the 1970s in the countries of Malawi and Zambia; working with the Government Printing Office. "Living in Africa is a life changing experience, which only becomes apparent when you move away and reflect on the continent you have left", writes Barton. Several years after leaving Africa, Roger decides to share his experiences with the rest of the world.

The book is very descriptive, well written, and enjoyable. It is an honest recount of the life in Africa that only a person who has lived there can tell so well. It is not just about the author's life on the continent, but it is also an account of the peoples' way of life during the post colonial era of the 1970s. It offers vivid peeks into the markets and bars where people went not only to trade and drink but to catch up on and share events in each other's life. Barton writes about the abundant wildlife and the animals and insects that invade houses, the euphoria that came with payday and the music, the dust and the poor road network in the countryside, wars and insecurity, the uncompromising style of the then Malawian president; the illegal currency markets and of course the waiting that seems to be the norm in most areas  "queues form for a government official to issue a do***entcrowds linger in the shade of trees for an intercity bus, invariably late. People wait on the side of a rutted road while an over laden bus is repaired. and then waiting for the rains for everywhere in Africa.the rains govern life..waiting for the rains is like waiting for life to be renewed".

The book also gives an account of the life of Africa's visitors, the expatriates. The cultural shock some got despite reading so much about the continent before heading out (the gap between information and reality is usually huge). For some, it was an opportunity to escape their inadequacies back home while for some their marriages were destroyed; yet for others there was no going back, they stayed on. Indeed living in Africa was a life changing experience for most of them.

What makes this memoir different is the fact that the author lived in the towns and villages for a long time. He got to experience life just the way it was. He visited the Southern Africa countries of Rhodesia (Zimbabwe) and Mozambique with the war raging; using the available transport means at the time- car, train, local steamer and the local buses; which was an adventure itself but not for the timid. He says: "Travelling by public transport in developing countries is inevitably an adventure, which can be exhilarating and frustrating, but never boring. The experience really starts before departure and appears to blend seamlessly into the journey itself. It is as if all the confusion and chaos of the waiting time accompanies you on the vehicle itself. It is a mechanism by which the western traveler can get closest to local life without the insulation of tour buses and taxis. It is a confrontation with the heat, jostling, noise, smells, delays and characteristics of the country. A ready-made package of culture, which the traveler must interact with, adjust to, come to terms with and realize it is not a show. This is real life carried on by ordinary people, everyday and in every town and city."

Yes, life in Africa was and still is a daily struggle but, as the author notes, the people have dignity and it could be said they are proud of where they came from despite the poverty levels. Even though the book was set in the 1970s, little has changed in most parts of the continent (especially in the countryside areas) in spite of the high levels of development in the urban centres. It is a book I would recommend for people interested in learning about the African way of life in that era in comparison to what is has become today. The coloured photographs included in most of the chapters are a bonus.

Roger J. Barton started his career in the printing industry and was recruited in 1970 by the Overseas Aid Organisation for a post of Training Officer in the Printing and Stationery Department in Malawi and then later, Zambia. This post offered him an opportunity to travel widely throughout much of Southern Africa. What he experienced gave birth to this memoir.
Search for the title using