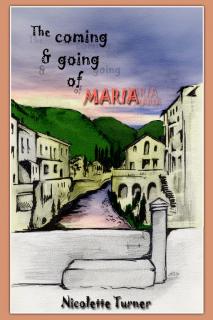 The Coming & Going Of Maria

When the beautiful and tactile Maria arrives in the tiny rural village of Torrenaldo, all logic flies out of the olive trees. Suddenly chaos reigns, there's a dead body on the ancient bridge and four old men and a prostitute are totally in the minestrone. But, as Inspettore Testa knows to his cost, it would be easier to persuade a herd of camels to pass through the eye of a needle than to get anyone of the inhabitants of this tiny village nestling in the Ligurian mountains to help him solve the crime.

So who is the murderer? Did the Mafia really come to Torrenaldo to commit such a dastardly crime? Or was it really a bunch of geriatric housewives hell bent on revenge? And why is everyone talking about rabbits?

This thousand year old village is determined to keep its secrets but the Inspettore and his mad Lieutenant, Mario Barbossa, are equally determined to find the truth.

A story for anyone who loves Italy, Mafia tales and cultural eccentricity; this snapshot of rural life in the 1970's which, bizarrely, is based on true events, is a very different and compelling read.
Search for the title using

(opens in a new window).
Very Good Story, Very Well Written, Definitely Recommended, Reasonably Edited in 1 reviews.
Paul Smith : This is one of the best books that I have read for a long time and I enjoyed it thoroughly.

It is a funny, irreverent, slightly risqu and the characters are wonderfully formed and very powerful; I'm sure we've all met people like those in the book.

It is set in a village in Italy (influenced by the author's own experiences) and follows the adventures of four sex-starved old men as they try to rekindle their youth, with disastrous consequences that impact their wives, other villagers and the authorities.

I have rarely laughed out loud when reading in a public place but this one did it to me - a great read.

A minor gripe - the number of typos and errors. I've reported this back to the author and I'm sure they will be fixed.