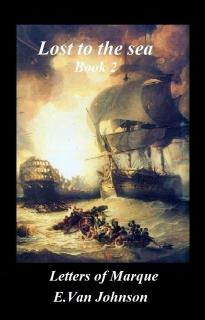 Lost to the sea Book 2. Letters of Marque

E.Van Johnson
Click link to see all books by this author.
Genres: Action and Adventure, Historical Fiction. Format: eBook. Views: This Week 38, Total 703.
Another seagoing adventure set against the background of the Seven Years War of 1754/63.
James is now a Captain in his own right, and bearing a Letter of Marque from the Duke of Northumberland; he sets out to rescue his old Captain and crew who are being held captive by pirates in the Azores.
By offering shares in the spoils, he raises enough money to buy the captured French prize brig Etoil, and arm her with guns from Alnwick Castle.
With his friend Charles as First mate and Charless cousin Rupert in command of the 200 troopers from the Dukes Regiment of Borderers, he sets out to enrich his backers and enhance his own fortune by capturing the pirates treasure.
En route, he becomes embroiled in the naval attack on the French port of Brest, and later, in the Governments expedition to capture the French Colony of Senegal.
Search for the title using