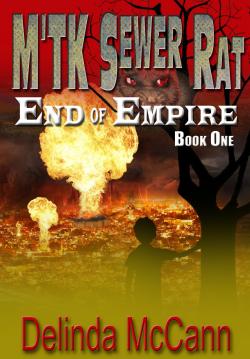 Delinda Mccann
Click link to see all books by this author.
Genres: Action and Adventure, General Fiction, Multicultural. Format: Paperback. Views: This Week 48, Total 842.
When young Jake Jaconovich lived with his parents in Wulfton, the industrial area of the city, Emperor Vanderholm had no idea that the person who would one day overturn his power and set the whole country on its tail lived and breathed the foul air of the slum.

Jakes earliest memories are of the death of his sister and his beloved mamas illness. He remembers fleeing to the coast to live with Mamas family. He will never forget the smell of rotting fish in the northern fishing village.

Jake was five when his family returned to the city where Papa worked for the railroad. They moved into an apartment in MTK, the worst slum in the city. Jake remembers how he soon became aware of other young children too drunk to play with him. After he got beaten-up the first time, he began the study of martial arts under Mr. Wu, the most powerful crime boss in the city.

Jakes life changes again when Emperor Vanderholm orders the army to burn MTK. Once again his family flees their home. While Jake stood on a ridge outside the city and watched as the army burned the slum, Emperor Vanderholm was still unaware of Jakes existence. He could not know that his own actions intended to weaken owner of the railroad, Mr. Rouseff, have moved Jake one step closer to bringing about the demise of the empire. The burning of MTK brings Jake and his family to the attention of Mr. Rouseff, who will do anything to thwart the Vanderholms.

Jake grew up to become a charismatic young man. After attending university under false credentials, he started his career as a lowly prosecutor, charging and fining drunks and prostitutes week after week.

The murder of a fishermans daughter in a northern village catapults Jake to the center of the political arena when the local fishermen ask Jake to prosecute the case against the emperors cousin Leon Fortenac.

The Fortenac case becomes the catalyst for change when the courts rule that the nation must adopt a constitution to reflect the true demographics of the country.
Search for the title using