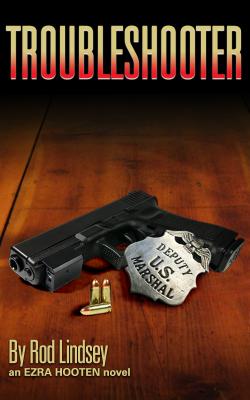 Rod Lindsey
Click link to see all books by this author.
Genres: Crime, Thrillers and Suspense, Commercial Fiction. Format: eBook. Views: This Week 73, Total 2870.
Ezra Hooten, a U.S. marshal with a reputation for bringing em back dead at least as often as alive, has spent the bulk of his career pursuing his boyhood best friend, and blood-brother, Norman Carpenter, a scalp-collecting psychopath. Friends since adolescence, Hoot can sometimes sense Norman  especially if hes close. As young men Hoot and Norman served together in the Vietnam War, where Hoot was awarded the Bronze Star for saving Normans life. But the tie that truly binds them is their connection to the girl both loved since middle schoolDonna. Soon as Norman got home from the war he married Donna. A year later he brutally murdered her, ultimately going to federal prison for life for it. And then escaping, often finding work as a contract killer.

Troubleshooter opens in the Pacific Northwest in the present time, 38 years after Donnas death, 28 since Norman went on the lam. Normans escape has been a very personal burden for Hoot, and he lives to see Norman behind bars again before retiring. Adding complications and a good deal of sex to the story is Angela, a confused young stripper who personifies the ghost of Donna in the minds of both men; Norman seeing her as an avenging spirit that he must kill again, while Hoot sees her as an unexpected chance at redemption  and as the perfect bait to catch Norman. The neverending manhunt is about to end...
Search for the title using

Five Stars
Troubleshooter is a buddy movie gone awry. Way Awry! These two men began as boyhood friends, bonding in the sweat lodges of a Shaman. They continue to remain friends throughout the Vietnam War where they were Special Ops warriors. But after the war, they take totally different life paths and end up with a wild desire to kill each other. Their relationship is not helped when one steals the others girlfriend. Federal Marshall Ezra Hooten, nicknamed Troublshooter because of his accuracy with a gun, and Norman Carpenter, a psychotic killer, known as Creeper, for his ability to creep up on the enemy undetected, have been tracking each other for years. Enter Angela Hunter who decides to leave her home, husband and two kids to become a reluctant stripper. Her life is soon entangled with the seamy characters in this gritty, sexy story which takes place in the magnificent North West. I love this book and I think it is extremely well written. It is filled with believable and exciting characters that act totally different from what you expect. Mr. Lindsey has put a surprise on every page and I highly recommend it to action loving readers who thrive on a good thriller.
Mary Firmin, author Deadly Pleasures