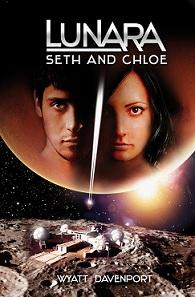 Wyatt Davenport
Click link to see all books by this author.
Genre: Science Fiction. Format: eBook. Views: This Week 71, Total 2957.
Earth is dead, destroyed by a barrage of meteors. What was left of the population has escaped to Mars and colonized it as humanities new home.

Lunara, a small colony on Earths moon, is charged with catching and mining meteors for desperately needed minerals. But the deep-seated human thirst for domination is not easily defeated, nor is the capacity for deceit and betrayal. All it needs is a powerful catalyst, a prize valuable enough to risk plunging mankind into another destructive war.

I have two complaints, but they may not worry most readers. The first arises from me as a writer, namely the issue of whether to show or tell. This author strongly falls into the show camp, and part of the structure of the book is to provide a mystery as to what is going on? The problem for me was that with no given firm background to anchor the illustrations, there are too many possible interpretations of a given show and there is a fine line between providing a mystery and providing confusion. A related point is that clues only work if everything else is sensible. (Agatha Christie was an expert at delivering such clues.) Here, the Protector, a mining ship, has rear gun turrets and can outrun a fleet of warships. Why and how? We later find Lunara has fearsome defences. Why? And how could it be invaded without giving a sign of trouble? Accordingly, some genuinely genuine clues provided to the mystery in the early parts of the book probably will not make an impression on the reader because there are too many other puzzles. Nevertheless, the overall construction of the book is impressive, however again this total predilection for showing through characters made the big scenes, and in particular the final battle scene, difficult to follow in terms of the big picture.