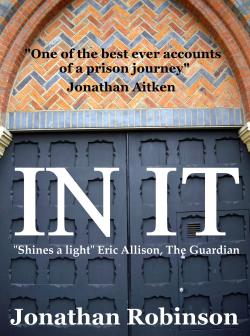 And so it was when the manuscript of In It came my way; the tale of one mans sojourn as a guest of Her Majesty at HMP Bedford and Hollesley Bay. Jonathan Robinson was a first timer; nicked for stealing from his employer and sentenced to 15 months.

Given that prison sentences have become much longer since I first trod the penal path, 15 months is short term- hardly time for a **** and a shave (as us old lags used to opine when a newcomer grumbled about spending a few months with us.)

When I first entered the adult prison system, I was a star. No kidding; all first timers wore a red astral sign on their jackets, to denote their lowly stature in the prison pecking order. Dont ask me why; prison service orders made as little sense then as they do now.

Robinson, the star prisoner, may just turn out to be a star writer. He paints a stunningly accurate picture of the chaos and confusion that exists in prisons like Bedford. These are local jails, where prisoners are dumped from courts, categorised and, eventually, shunted around the system.

Apparently, a copy of In It has been sent to Justice Minister Chris Grayling. It should be required reading for him as he sets about his Transforming Rehabilitation programme.