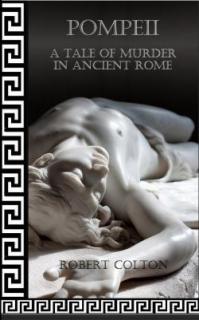 Pompeii: A Tale of Murder in Ancient Rome

Robert Colton
Click link to see all books by this author.
Genres: Historical Fiction, Mystery. Format: eBook. Views: This Week 84, Total 2486.
Marcellus has received a message from his beloved uncle with grave news, his father is dying. After sailing from Alexandria to Italy, Marcellus lands in Pompeii.

Alongside Tay, a clever young man he won in a fixed game of dice, he witnesses the funeral procession of a local politician. The following day, Marcellus sees the dead man's widow escorting an elderly slave to the very ship he is taking to Ostia.

Marcellus finds himself charged with the servant's final duty, delivering a letter to a man named Marcus.

Accused of a crime he did not commit; only Marcus and a mysterious woman, named Helen, can clear Marcellus's name. Fleeing from Rome in search for the pair, he and Tay return to Pompeii.

After Helen is killed and Marcus can't be found, Marcellus and Tay become the caretakers of the dead woman's child. Needing a wet nurse, the two find themselves at a local brothel. Hiding in plain sight, they begin discovering Helen's secrets, with the help of a seductive Oracle. It becomes clear that Marcus must be found, not only to clear Marcellus's name but to explain why someone wanted Helen dead.

Nothing is as it appears; and after the region is struck by a devastating earthquake, Marcellus and Tay find just enough answers to realize that Helen's murderer is far from their greatest threat. If they can decipher why she was killed, they just might save themselves.

False identities; quick lies, and a significant amount of coin can only keep Marcellus out of peril for so long. It might take a sign from the gods to solve this tale of murder in ancient Rome.
Search for the title using

(opens in a new window).
Alternatively, the author has provided links that you can use to buy the book.
If you want to see the link before you click - hover over a Click to Choose link in the list above.
If you don't see the country or format you want to buy - try a Google Search - this may deliver a book that fits your region or needs.
Important: You don't purchase through Wise Grey Owl - the author decides where you purchase her/his book and provides a link to the purchase site. Wise Grey Owl is not responsible for external links. Please validate the link before you click using a reputable virus checking application.
Good Story, Well Written, Recommended, Well Edited in 1 reviews.
Ian Miller : The basic plot is as follows. While in Alexandria, Gaius Sempronius Gracchus Marcellus is to be made Tribunus militum under Corbulo, but instead of reporting for duty, he and his slave, Tay, travel to Rome, where Marcellus' father is dying. He finds the father alive, there is confusion over a letter that Marcellus has wrongly taken to his father's house, and when he takes Helen and Marcus there to receive it, there is an argument with his father, his father has what is presumably a heart attack, bangs his head on a table as he falls, and dies. An old friend of his father accuses Marcellus of patricide. Helen and Marcus flee, Marcellus and Tay eventually chase after them to get them to testify that the death was natural, and when Helen is murdered near Pompeii. The great earthquake of 62 AD occurs, and while trying to unravel what is going on, Marcellus and Tay become the owners of a brothel. The descriptions of Pompeii and Roman life indicate that the author has done a lot of research on the subject, and may well have fallen in love with Pompeii. The story is easy to read and the descriptions of what was going on in Pompeii seem authentic, at least to the level we can understand a period so far away.

On a lesser note, I found the first part of this plot a little implausible. If a Roman received orders to report for Army duty, he would report. Then there was the death in Rome. The accuser was not a witness, so instead of fleeing, why not get witnesses to the fact that the only blood would be on the corner of the table (assuming there was any wound at all)? Roman prosecutions were private, and would have to be brought by the accuser, who would have to admit he did not see anything. Further, Marcellus was on excellent terms with the Consul Petronius, so why flee?

The major characters are well-drawn, however, I found it hard to believe that Marcellus, essentially the least aggressive person you could imagine, would want to be in the army, or that any friend would recommend him to one of the strictest of Roman disciplinarians. Each legion had one Tribunus laticlavius (the tribune of the first cohort) (the other tribunes, tribunii angusticlavii were usually from the equestrian order) so getting a military position required somebody else putting their reputation on the line. However, this has no part in the story, which is reasonably easy to read; there is a very large cast of characters, and apart from Marcellus' complete lack of ambition, the characters plausibly fit into what we think some of Roman society might have been like. The story has an internal logic, and you may have trouble guessing the ending, and while Marcellus stumbles around and gets side-tracked readily, nevertheless he and Tay get there. If you have some passion for Roman history, there is plenty here for you.