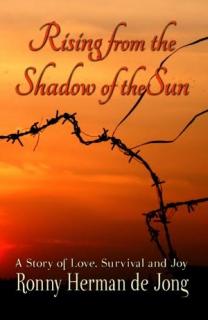 Rising from the Shadow of the Sun: A Story of Love, Survival and Joy

Ronny Herman de Jong
Click link to see all books by this author.
Genres: Multicultural, Memoir/Biographies, History. Format: Multiple. Views: This Week 73, Total 2387.
Rising from the Shadow of the Sun, A Story of Love, Survival and Joy brings the horror and losses of World War II on Java off the battlefields and military POW camps into the world of Ronny Herman, who is barely three years old in 1942 when the Japanese conquer Java and force her family into prison camps where they would suffer until 1945.

Also available as an audio book, more at the author's You Tube channel.

This second edition of Rising from the Shadow of the Sun, A Story of Love, Survival and Joy exemplifies the power of positive thinking, of hope, of perseverance even in the most perilous and life threatening situations and of a mother's love for her children, surpassing even the tragedy of death.
Jeannette Herman-Louwerse, Netty, a young mother incarcerated by the Japanese on the island of Java during world War Two with her two little girls Ronny and Paula, endures starvation, harsh punishments and diseases for almost four years. They barely survive.

In a secret diary, at the risk of being tortured and killed had it been detected, Netty writes letters to her parents in the German-occupied Netherlands, and gives an accurate historical account of the Japanese invasion and the lives of women and children interned under the brutal regime of the Japanese. She describes the years of physical and psychological suffering, but also the hope, faith, solidarity and resilience that keep the imprisoned women alive.

Netty's husband Fokko, a pilot with the Dutch Naval Air Force, stationed in Surabaya, escapes with his squadron hours before the Japanese submarines encircle the island. Working under British command in Sri Lanka, Fokkos story is chronicled along the same timeline as that of his wife and children; he, too, survives.

Ten years after the war Ronny continues her education in the Netherlands. She earns a B.A. in English Literature from Leiden University and marries an ambitious young man. After the birth of two daughters and a son they emigrate to California in 1972. The close-knit family serves as a strong basis for the ups and downs in Ronnys life.

Setting goals and fulfilling dreams, Ronny frequently visits her parents in the Netherlands. She translates her mother's diary and based on that publishes her first book In the Shadow of the Sun in 1992. After her father passes away the bond with her mother grows even stronger.

The first edition of Rising from the Shadow of the Sun, A Story of Love, Survival and Joy, published in 2011 includes Ronny's memoir and the Japanese War Crimes Files. This second edition additionally commemorates her mother's life: it's the complete story.


REVIEW: All told, this is an important work which provides significant stories about the victims of a lesser-known part of World War II in Southeast Asia. As with "The Diary of Anne Frank" and Elie Wiesel's "Night," we marvel at Netty's courage and strength in caring for her daughters throughout this catastrophic period. We experience her husband's enduring love, and after the horror has passed, their daughter Ronny's affirmation of life. "Rising from the Shadow of the Sun" is an important account of courage and hope.
Nancy Owen Nelson, PhD

REVIEW: "Rising from the Shadow of the Sun" starts with the wartime diary of her mother but continues the post war saga of her family. Some of the worst wartime conditions were suffered by those imprisoned in East and Central Java. Ronny's story, in part auto-biographical, describes in moving language the unimaginable suffering of interned mothers with children. The end of the war did not bring peace to Java but a new, murderous episode in the Indonesian struggle for independence, and caused the newly re-united family to crisscross this war-torn island during a desperate and failed attempt to re-establish a pre-war society. The story ends, where so many WWII refugee stories endin the New World, in her case as a young adult, in the United States.
B. van Oort

REVIEW: "This is a compelling story of courage, resilience, the will to live and the determination to survive. It speaks of the power that love and faith have to keep hope and optimism alive. Ronny vividly tells parts of their story as her mother, Netty, recorded it in her hidden diary during the years of their internment.

Nettys bravery and resourcefulness not only saved her own life but that of her two young children. Living day to day, she found ways where there was no discernible way to protect and care for her children while helping fellow prisoners whenever possible."
Pocahontas Gertler M. Ed., LHD, Author of While I Run this Race
Search for the title using

(opens in a new window).
Alternatively, the author has provided links that you can use to buy the book.
If you want to see the link before you click - hover over a Click to Choose link in the list above.
If you don't see the country or format you want to buy - try a Google Search - this may deliver a book that fits your region or needs.
Important: You don't purchase through Wise Grey Owl - the author decides where you purchase her/his book and provides a link to the purchase site. Wise Grey Owl is not responsible for external links. Please validate the link before you click using a reputable virus checking application.
Good Story, Well Written, Definitely Recommended, Well Edited in 1 reviews.
Paul Smith : This book has had a lot of reviews on Amazon's Site. So I think it qualifies as "Reviewed" here.