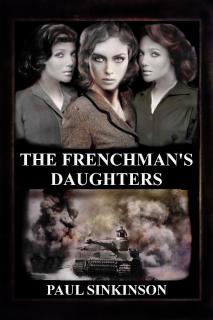 Paul Sinkinson
Click link to see all books by this author.
Genres: Historical Fiction, Action and Adventure, Military and Espionage. Format: eBook. Views: This Week 475, Total 3483.
The daughters of a French railway engineer are thrown together, with a number of British and French soldiers, in the aftermath and turmoil of events that followed the Dunkirk evacuation in 1940.

Following an emotional and traumatic escape from the advancing German forces they arrive in England. As a result of their experiences, and the manner that they combated the Nazi regime, the three sisters, all civilians, are seconded, along with the survivors of their group, into the intelligence section of General De Gualles newly formed Free French Force.

After extensive training in England where the younger members start to form the inevitable bonding and love interests, they return to occupied France to undertake a series of missions considered vital for the liberty and honour of France and its Allies.

Despite living in fear of capture or betrayal, they liberate bullion in transit from the German SS which had been stolen from a prominent Jewish community in Tunisia while it was being transported from Tunis to Bordeaux in France. Later, they are involved with a train robbery to recover millions of francs destined for Germany from the Vichy coffers.

As the Allied forces land in North Africa they are delegated to delay German troops who are re-occupying Vichy France in an attempt to stop the French Navy based at Toulon from handing their ships to the Allies.

Part of their brief is to liaise with the resistance loyal to General De Gaulle and to train a number of them into small commando units ready to disrupt any German Forces as they attempt to move north to meet the Allied invasion forces who will inevitably arrive in northern France.

During their operations, the three sisters take leading rolls in the assassination of the perpetrators of horrific actions of both the Milice forces sending Jewish civilians to the labour and death camps in Germany and also the person considered responsible for the massacre of hundreds of the civilian population of the village of Oradour-sur-Glane in the Limousin.

The story concludes with re-union of the team a number of years after the end of the war.
Search for the title using