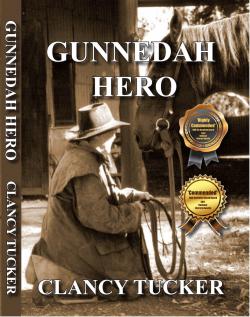 It's modern day Australia and fourteen-year-old Gunnedah Gunnie Danson
has a 500-word assignment on drought. His late grandfather has left him a box containing a manuscript. Its been written by Gunnies great-great-grandfather, Smokey GunDanson after his journey up the long paddock during a harsh drought as a fourteen-year-old drover in 1910. At the back of the manuscript
is an envelope. Its NOT to be opened until Gunnie has read the entire story.

Gunnie spends the weekend at Wiralee Station; a cattle station thats been in the family since 1848. There, he reads the awesome manuscript and learns of Smokeys adventurous journey.

Gunnie overhears several secretive conversations. His snobby Aunty Kate wants to divorce his uncle and sell Wiralee Station. He finishes the manuscript
and opens the mysterious envelope. Will it legally prevent his aunt from selling Wiralee Station?
Search for the title using

(opens in a new window).
Alternatively, the author has provided links that you can use to buy the book.
If you want to see the link before you click - hover over a Click to Choose link in the list above.
If you don't see the country or format you want to buy - try a Google Search - this may deliver a book that fits your region or needs.
Important: You don't purchase through Wise Grey Owl - the author decides where you purchase her/his book and provides a link to the purchase site. Wise Grey Owl is not responsible for external links. Please validate the link before you click using a reputable virus checking application.
Good Story, Well Written, Recommended, Well Edited in 1 reviews.
Paul Smith : This is a book that I really enjoyed. Its style is informal and displays the optimism of the Australian culture, so different to my own English one which can be snobbish, mean, miserable and whining at times fed by own awful media that looks for the bad in everything.

The book has an old innocence with only a few bad guys but a real story of hope and goodness. It would make a great Disney film along the lines of "An Incredible Journey" of some years ago and would be a good counter to the shoot-em-up, violent films that are aimed at younger people today.

It is a story of hope, of good conquering over evil and is very uplifting.

Some will argue with the style of the prose which borders on colloquial at times but I found it matched the book well. A little editing by a non-Australian culture may make it better for an international market but, personally, I found the Aussie slant charming.