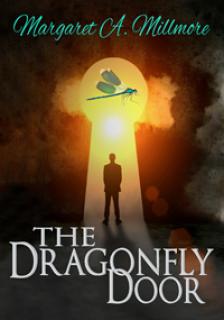 Margaret Millmore
Click link to see all books by this author.
Genres: Thrillers and Suspense, Science Fiction. Format: Multiple. Views: This Week 27, Total 2240.
The Dragonfly Door by Margaret A. Millmore

Frank Mann is a simple person. Though he is blessed with an income that allows him to volunteer and live comfortably, he lacks direction toward his future. The loss of his girlfriend has left him depressed, and after a bad night of over-indulgence in alcohol and a bar fight, Frank decides its time to clean up his act.

The same day, Frank notices a spectacular swarm of dragonflies, and although it amazes him, he thinks nothing of it. The following day he sees another dragonfly, only this time it takes him away to a place beyond his imagination, a garden of unspeakable beauty. Is this a hallucination? Hes confused, but the next day he continues his volunteer work at the local Veterans Hospital. His friend and sometimes surrogate mother, Betty, director of voluntary services, recruits Frank to assist with a new patient, Jorge Mendoza, who was found delusional and uncommunicative wandering the streets. Frank inadvertently discovers the one topic that Jorge responds to: dragonflies. Although Frank doesnt know it yet, Jorge is the key to the mysterious journey he took the day before.

Jorge is a scientist from the future, a future that has survived the turmoil of the twenty-first century and emerged into a better, healthier society. But Jorges world is threatened by a virus created by a deranged scientist. The virus threatens to destroy the worlds food sources. Jorge and his brother Felipe, also a scientist, hold the key to resolving the threat. They have created a device, the Dragonfly Door, that allows them to travel to the past, but it must be carefully monitored and controlled. They find a time before mankind where they can grow food without contaminating the timeline. However, they must also retrieve the original virus so that they can create a cure and heal their ailing agriculture before it is too late.

The door is tied to the travelers DNA, and when Felipe travels through for the first time, a miscalculation strands him there and he is presumed dead. That drives Jorge to work even harder. He travels to 2013 and creates an identity as a solider assigned to an army base in Kansas, which houses the laboratory and scientist that created the virus. But the presence of Felipes DNA remains, causing the door to malfunction. More importantly, this malfunction is affecting Jorge on a mental and physical level, and threatens to kill him.

On Franks third trip through the door he is discovered by Clarisse, a scientist who follows him back to 2013. Through her, Frank learns about the door and who Jorge is, but is no closer to understanding why he is suddenly part of it all.

When Jorge tries to tell Frank he is in danger, Frank isnt sure if its from the future or the present, but enlists his closest friend, Clint, a nurse at the VA, to protect Jorge and help Frank solve the mystery that plagues him. Unknown to them all, a faction from the future has interfered with the door in the hopes of obtaining the virus sample first, so they can control the future. This interference increases the danger to all involved.

When Frank meets a woman named Selena, he is mysteriously drawn to her, but more importantly, she knows who and what Jorge is. She is Jorges great-great-grandmother. Even more surprising, he learns that he is Jorges great-great-grandfather. That genetic connection is the reason the door (and dragonflies) have come to him, and also the reason that Felipe, who is alive but not well, seeks him out.

Frank, Selena, Clint, Felipe, Clarisse, and others they have recruited devise a plan to get Jorge to safety, where they work together to stabilize the door and return both brothers and the virus sample to the future. But meanwhile, dangerous men are working against them. Frank and friends must find a way to escape their intentions and repair the damage done to the timeline. Will they succeed, and at what price?

Search for the title using

(opens in a new window).
Alternatively, the author has provided links that you can use to buy the book.
If you want to see the link before you click - hover over a Click to Choose link in the list above.
If you don't see the country or format you want to buy - try a Google Search - this may deliver a book that fits your region or needs.
Important: You don't purchase through Wise Grey Owl - the author decides where you purchase her/his book and provides a link to the purchase site. Wise Grey Owl is not responsible for external links. Please validate the link before you click using a reputable virus checking application.
Good Story, Well Written, Recommended, Very Well Edited in 1 reviews.
Paul Smith : This is a very imaginative Sci Fi Novel that uses restricted time travel for a mind expanding story that is enormous in scope. It has some interesting twists and turns and the characters, especially the main character, are well formed.

I was disappointed when it finished as I wanted it to go on for ever and couldn't pick up another book for a few days as The Dragonfly Door was still in my mind; it still is!

A few pointers for the author if I may be impertinent: You don't need to explain everything - there's a little too much wrapping up loose ends for my taste as I prefer to work things out for myself. I'd also prefer a few less gets and gots (and no gotten's as that really rubs) this side of the Atlantic. really small gripes though - a fantastic read. Go out and buy it - it costs less than that glass of wine you like, or the cup of expensive StarRipOff's Coffee.