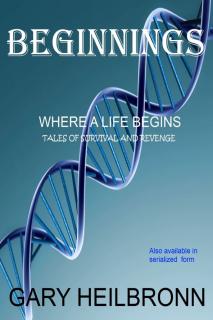 Gary Heilbronn
Click link to see all books by this author.
Genres: Historical Fiction, Literary Fiction, Crime. Format: eBook. Views: This Week 34, Total 2012.
A blockbuster historical tale of genetic memories spanning millenia. Set in the Basque country of Spain and France over two decades of Spains civil war, nazi occupation, liberation, recrimination and political division, powerful characters play out an ancient cycle of murder and revenge resurfacing thru history and returning to haunt a young woman in the mid-20th century as she seeks to escape war and violence and find a new life for herself and her daughter; only to realize there is no escaping the past. With multi-layered themes of love, intrigue, myth, science and true historical detail, BEGINNINGS explores lesser known events from the late stone-age, Phoenician exploration, Carthaginian conquest, Visigoth rule and the Spanish inquisition down to the post-war years.
Search for the title using

Dorothy Johnston : Beginnings: Where A Life Begins is an ambitious, multi-layered novel about the workings of genetic memory through many generations of women. The novel deserves a wide readership not only because of its original and audacious premise, but because each historical episode is vividly imagined, and the female characters, linked in ways they recognize but do not fully understand, are remarkable inventions in themselves.
The novel is predicated on the controversial idea that Mitochondrial DNA, transmitted from mothers to daughters, is understood, by certain outstanding women of their times, as an accumulated heritage. These women know the line they come from even if they cannot explain this knowledge; it gives them courage and it makes them proud.
Many of the women Heilbronn portrays as young, athletic warriors, but the main protagonist, Maria, a Basque refugee from Francos Spain, is of a different type. She suffers the tumultuous war years, having barely escaped across the border into France, and wishes only to remain unobtrusive and unnoticed by those who have the power to do her and her daughter, born shortly after her arrival, harm. The story moves in a wide arc, returning to Maria and Anna at various points. It is while Maria is giving birth to Anna  in a kind of trance  that the first return to deep genetic memory is accomplished, to the Cantabrian Mountains in about 10,000 BC. Other sections include Coming of the Phoenicians, Siege of Saguntum, (in the third century BC) and the Spanish Inquisition in the fifteenth century. Each is conveyed with an eye for detail, while the forward momentum of the story is maintained. Mt favourite section tells of the coming of the Phoenicians to the northern coast of Spain. The many differences between the indigenous people and the Phoenician traders, the troubles in which they find themselves, and in particular the character of Hannh, the young female warrior, made me want this section to continue.
At the end of the chapter describing Marias escape, readers are introduced to an original, ornate dagger which, like the characters elusive yet crucial memories, has been handed on through thousands of years and will continue to play its own part in the story.
In an afterword, Heilbronn gives an account of the historical and scientific background to his novel, with particular reference to the meaning of genetic links in people like the Basques, whose ethnic identity and genealogy have been insulated and isolated through millennia. Beginnings is complex and full of intriguing concepts and characters, yet at the same time emotionally vivid and fast-paced. Heilbronn has the ability to carry his readers along no matter if the scene is set in Palaeolithic times or the 1950s, with the rise of the Basque separatist movement. I highly recommend this book and look forward to its sequel.

Jackie Mae : Let me start out by saying I am giving it a five star rating because it commands that. This multi-layered, fast-paced historical novel is one which can be read over and over. It is unique in that the premise is based on Mitochondrial DNA carried from mother/daughter throughout time. The characters are strong each in their own way. Maria and Annas journey captivates you page after page. Having checked a few of the facts I know that the authors historical references are accurate. As I am fascinated with the possibility of previous lifetimes this book was intriguing. Well written with vivid characters that brings the tapestry of life alive in a very meaningful way. This author now has one more fan