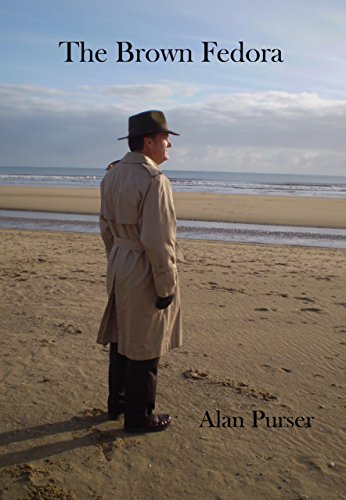 The Brown Fedora is set during the WW ɪɪ, between 1939 and 1945. A love story, shaped by the chance meeting between JAMES MATHIAS and REBECCA ARMSTRONG.

Their first meeting is at the annual village cricket match, their developing relationship is played out against the backdrop of the Second World War. Shortly after their initial meeting, Rebecca becomes engaged to TRISTAN TURTON, something that for years has had a certain inevitability that they would marry. The expectation was always that they would marry, yet James and Rebecca soon become Lovers. Previously at the hands of the cold-hearted and callous German Spy ring, is the ill conceived and brutal killing of Jamess mother, AMY, Which overwhelms Jamess young life. The spy ring operates in the heart of England from before and during the Second World War. The heartless murder of his mother propels James from his formulated and conventional University life, to be drawn into the uncompromising and malicious world of Espionage and Spying.

The devastating effect of his wifes death initiated a crippling Stroke upon TOBY, Jamess father. After which James takes up the mantle of Tobys work, operating within the fledgling and rapidly developing Special Forces. James shows little concern for the safety of his own life, due to his overwhelming and all consuming determination to fulfil his perilous Wartime assignments. Whilst undertaking his wartime duties, he courageously begins to hunt down and to eradicate the covert Spy ring that killed his mother. His irreproachable action provokes, WARREN STREETERS, the leader of the spy ring, whose depraved and overpowering obsession is to terminate James and his family, at any cost. Streeters desire for notoriety develops his signature means of killing, to shoot his quarry at point blank in the Left Eye.

Rebeccas father, JACK ARMSTRONG, is an American Millionaire who has left America after Megan, his wifes death, along with his daughter Rebecca, to live in England and to aid the War Effort. Jack falls in love with his housekeeper CELIA ELLIS, she does not know of Jacks true wealth. Celia is a strong forthright woman and when Warren Streeter, attacks Rebecca she does not consider her own safety when making her defence of Rebecca.
Life deals Tristan one bad hand after another as he falls foul of WARREN STREETER, the leader of the German Spy Ring. STREETER mistakenly believes that he has James in his sights attacking Tristan and leaving him for dead. James is quickly to the rescue, but he must make a decision to save Tristans life or to go after STREETER, to capture or possibly kill him. His decision made for him, as he saves Tristan life, yet once again Tristan falls foul of life and is almost mortally wounded on Slapton Sands in a rehearsal for D-Day.

COLONEL WEBSTER is more than just Jamess boss he is in truth his father, a secret that he only shares with Mrs RAWLINGS, his assistant. At a time when his believes that he might lose his son James, he confides in Mrs Rawlings that James is his son?
After years of missed opportunities, eventually James and STREETER confront each other, in a revengeful encounter. Initially James suc***bs to STREETERS brutality and is subjected to a vicious, cruel and prolonged beating which almost takes his life. Yet from the depths of despair and fatigue, somehow, somehow James manages to overcome and kills STREETER. Colonel Webster pushes himself to the physical and mental limits, as he blames himself for the level of violence that STREETER has subjected his son to. He travels with Jamess bedside and watches over him for days as James fights for his life and then he has to fight for his own life.

As the war draws towards its conclusion, James is needed for one last mission, to counter the threat of the V1/V2 rockets. James successfully completes his mission but becomes lost in France. Whilst everyone believes James to be dead, Rebecca holds firm in the belief that he is still alive. At the conclusion of the War, the story ends where it began, at the annual cricket match. Without confirmation that he is still alive, the reader has to accept that James scores the winning run to win the game.
Search for the title using