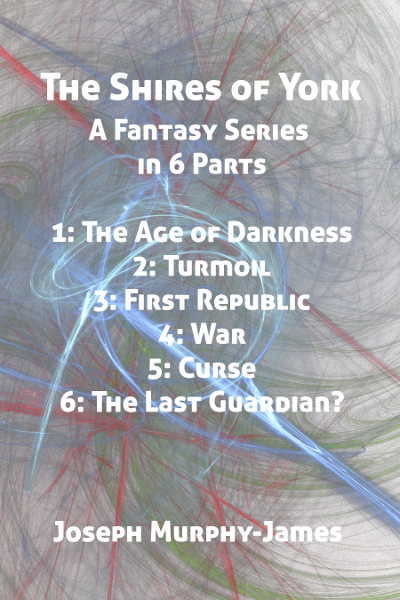 
England's Yorkshire is a pretty place of moors, dales, coasts, lovely villages and a fine history tracing back centuries. So imagine it as a backdrop for a rich fantasy world that weaves the real Yorkshire into an epic tale involving demons, dragons, elven, witches, wizards, dwarves and much more.

The story is told in six parts, telling of a struggle between the forces of the underworld and the Legion of the Deity, assisted by their Elven allies. At the centre of the story are the Veils of the Shires of York. They provide a pathway between Dämonen and the Shires, the only route. To open any of the four veils requires three crystals; whoever controls the crystals commands the Shires of York. The Dämonen crave domination and an unlikely alliance seeks to stop them.

Each novel in the series is set in a different stage of Yorkshire's history; time flows at a different rate for the Dämonen and that gives their actions a hint of spice.


The human population are ruled by Romans who are in a hurry to leave, so much so that they create a power vacuum that many rush to fill, including Cartimandua, Queen of the Brigantes. She will do anything to keep her position, even colluding with devils.

The evil Dämonen, who seek to dominate the Shires of York, have been exiled by the Elven, and their only way into the Shires, through the Veils is blocked because they do not have at least three of the twelve Crystals that are needed to open a Veil.

Tanwen, the Fire Manon, the name dragons give to their Queen, and her mate Padrig, have the means of preventing the Dämonen from achieving their objectives. Will they succeed and be good guardians for the Crystals of the Veils? Malevolence, a phantom who roams the Shires is not all she appears as she intervenes, but on the behalf of whom is uncertain.


The Vikings have arrived at the coast of the Shires of York and the witches want them to implement the Danelaw so that they can practice their craft without interference. With their sorcery, they help the Vikings win a decisive battle in York and accidentally cause a cascade of events that lead to turmoil within the Shires.

Meanwhile, Lady Tanja's arrival in Dämonen is creating new conflict that High Priest Albert intends to prevent, but can he? The dragons push themselves to centre stage, aiming to restore peace to a troubled Shires of York.


The Norman invasion of Britain has occurred and Nobles of the Shires are revolting against the taxes that William, the victor, has imposed. The Normans hit back and harry the North, using rather unconventional tactics.

The etherial land of Dämonen has settled into a new order that it calls the First Republic. Albert is concerned about the shape of the republic and worries that conflict may be built in to the Dämonen psyche. The High Priest plans a diversion. The Elven wish to recover the Crystals of the Veil and exile the Dämonen once again but are thwarted at every turn by unlikely encounters with dragons and dwarves. An ancient dark veil, not seen for centuries, makes a worrying appearance.


The Dämonen have initiated a war to dominate the Shires and use a network of Monasteries, Abbeys and Priories in an effort to to control the human population. They hold the North and West Ridings of the Shires but the Elven control the East and intend to keep it.

The Elven initiate a call to arms and all but the Legion of the Deity respond: Dragons, witches, wizards and, of course, the Elven. To everyone's surprise an erstwhile adversary joins the fray. Initially, secured in the East Riding, the alliance needs to push back the Dämonen if they are to win the conflict and the scales are delicately balanced.


The Shires of York are blighted with storms and tempestuous rain, flooding, a murrain that affects livestock, famine and finally a pestilence that the human population calls the black death.


Mankind is occupied with a huge conflict, the War of the Roses, that results in one of the largest battles ever to be fought on English soil. One guardian of the Crystals of the Veil remains and only this dragon can control the Veils, the path between the Shires and Dämonen.

The dragon's life is in peril and he is forced into hiding. As he grows he becomes restless and wishes to fulfil his destiny, whatever the price. Will the Legion of the Deity, the Dämonen Senate, the Elven or the goblins allow this or is he to perish at one of their hands?
Search for the title using