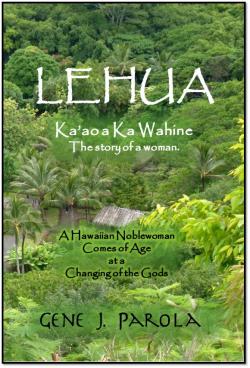 This coming-of-age novel is the first in a series that will chronicle Lehuas life as she awakens to womanhood and as a leader of her people. Successive books will trace her voyage during the tumult of 19th century Hawaii.

E Komo Mai
In the spring of 1819 King Ka me ha me ha I died after reigning over the first unified Kingdom of Hawaii.

His young son, Li ho li ho, became Kamehameha II, but effective control of the government was inherited by the old kings favorite wife, Ku hina Nui (Queen Regent), Kaa hu ma nu. That fall, Liholiho was forced to agree to the abandonment of the native religion: the lifting of the ka pu.

Lehua lia kahuama lioaka lani paaka lo le (Lehua, the shiny haired questioner), the fictitious young noblewoman of this novel, comes of age at this trying moment in Hawaiian history. Her ancestry gives her the right, responsibility and ability to be her peoples leader, but with the lifting of the kapu, she is suddenly bereft of her divine reason to be.

Beset by doubt, alien temptations and a welter of rational, if frightening, options, she falls in love with a half-Hawaiian paniolo (cowboy) who, in rescuing her from kidnappers, takes her on a romantic Hawaiian road trip. Together, they confront an uncertain future astride the divergent forces that will ultimately doom her culture.

In 1893 local American businessmen overthrew the Republic of Hawaii and traded the Islands to the U. S.

(opens in a new window).
Alternatively, the author has provided links that you can use to buy the book.
If you want to see the link before you click - hover over a Click to Choose link in the list above.
If you don't see the country or format you want to buy - try a Google Search - this may deliver a book that fits your region or needs.
Important: You don't purchase through Wise Grey Owl - the author decides where you purchase her/his book and provides a link to the purchase site. Wise Grey Owl is not responsible for external links. Please validate the link before you click using a reputable virus checking application.
Very Good Story, Very Well Written, Definitely Recommended, Very Well Edited in 1 reviews.
Paul Smith : Lehua, Ka'ao a ka Wahine: The Romance of an Hawaiian Girl by Gene Parola
Reviewed By Courtney Wells

When Queen Ka'ahumanu decrees the denial of the native Hawaiian religion, the ali'i (nobles) obey immediately and the kahuna (holy men) become criminals. This abrupt, devastating change forces 18-year-old Lehua to grow up fast, shouldering responsibility for her cherished culture, which is quickly crumbling down around her.

Exactly what difficulties does she face? White merchants and planters exploiting the land, destroying a once rich Hawaiian civilization; ignorant missionaries embracing the "White Man's Burden" and replacing the kapu of the kahuna with the 'fear of God', subsequently disrupting the spiritual, political, and agricultural lives of the Kanaka; and last but not least, the nobility struggling under increasing external pressure to find new ways of leading. As Lehua and her family struggle against the backdrop of a dying Polynesia, she plays a major role in the historical transition of her beloved land.

World history is replete with stories of various cultures and societies forced to surrender their identities in the face of invading, occupying forces and Lehua is no exception. In stark, vivid detail, author Gene Parola highlights both the lush, long-forgotten history of the Hawaiian islands, as well as the tragic, avaricious events that caused it to become a distant memory. Its common in the white supremacist worldview to see other cultures as backwards, savage, or somehow lacking, but throughout the pages of Lehua, Parola demonstrates in commanding fashion just how false these assumptions often are. In displaying the richness of pre-Christian Hawaiian culture, Parola does a commendable job of opening the readers eyes to the complex depths of a world untouched by modern civilization, while also laying a solid foundation for its ultimate transformation.