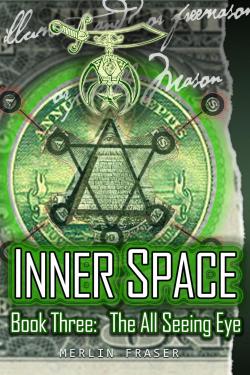 Merlin Fraser
Click link to see all books by this author.
Genre: Mystery. Format: eBook. Views: This Week 80, Total 1314.
It is necessary to establish a universal regime over the whole world.
(Writings of the Illuminati, 1780.)

Information is Power: For thousands of years men have created secret societies, brotherhoods and used religion in their never ending quest for the most addictive of drugs POWER. The main tool of control had always has beenFEAR! That was until he invented MONEY!

Today there are many who ask; Who really wields the power behind the world throne?

Rumours and conspiracy theories have haunted the secret world of Freemasonry for decades. This has prompted questions as to the existence of an Inner Circle, a group so powerful that they have an unnatural influence over Governments and World affairs.

Could it be that there is a New Illuminati ? Or has the old order just resurfaced as the invisible prophets of Capitalism. An elite group so powerful they control the financial resources of the world and would seek to recruit their disciples from within the organised and highly disciplined ranks of Freemasonry itself?

To Detective Chief Inspector Nick Burton such things as wild conspiracy theories belong in the world of goulies and ghosties and things that go ***p in the night. Or at least they used to, unfortunately some of his more recent investigations have led him to challenge everything he thought he knew.

Doctor Jill Tindell, his fiance, and her boss professor Harman-Jones of Cambridge University have been studying and experimenting with the powers of the human mind; Parapsychological phenomenon such as telekinesis, and projection of the mind beyond the confines of the body.

At first Nick was enthralled but his jaundiced policemans eye quickly saw a frightening downside to their experiments. His biggest fear was that if he could see it then so could others people who would not hesitate to use such power to their advantage.

The problem is has his dire warnings come too late and is his worst nightmare about to become reality? And if so.what the Hell can he do about it?
Search for the title using